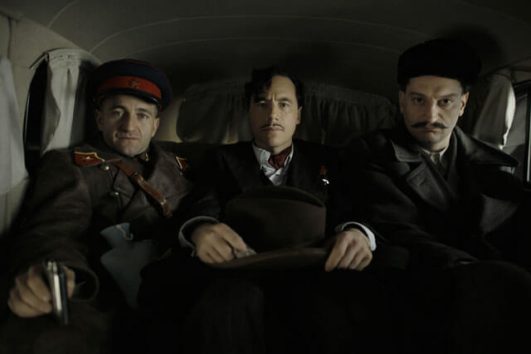 His last joke about Hitler was his undoing: in 1938, comedian and Stalin impersonator, Hans Zeisig (Michael Bully Herbig), has to flee Nazi-ruled Berlin on a fake passport. While dreaming of getting to fame in Hollywood, he ends up in Moscow’s famous hotel “Lux”, a haven for exiles and hideaway for communist officials from all over the world, many of them from Germany of all places. When the Soviet intelligence agency mistakes Zeisig for Adolf Hitler’s defected personal astrologer, the apolitical entertainer finds himself caught in the middle of bloody intrigues schemed inside Joseph Stalin’s power apparatus. Much to his surprise, Zeisig meets his former stage partner Siggi Meyer (Jürgen Vogel) and the Dutch resistance fighter Frida van Oorten (Thekla Reuten), both firm supporters of the idea that Communism is good at its heart. The three friends are drawn into an adventure that soon proves to be a struggle of life and death.