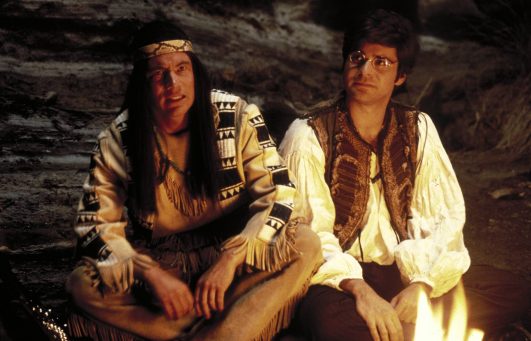 The Wild West, sometime during the 18th century, somewhere in the middle of Shoshone territory: the Indians dig up the hatchet! Blood brothers Abahachi, chief of the Apaches (Michael Bully Herbig), and Ranger, a Southerner (Christian Tramitz), wrongly accused of killing the Shoshone chief’s son and stealing the gold of the Shoshones, have escaped from their captors’ stake. This means war!
Yet the Shoshones do not know that their tribe’s alleged friend, Santa Maria (Sky du Mont), is the true murderer and thief, and that it was him who freed the captives otherwise fated to die. Eavesdropping on the Shoshones’ prisoners, Santa Maria’s henchman Hombre (Hilmi Sözer) overhears an interesting piece of information: all of a sudden, Abahachi remembers the existence of a hidden treasure that could be used to buy their way out of Shoshone captivity. Unfortunately, though, Abahachi fails to remember to whom he gave the three other pieces of the treasure map years ago – the start of a thrilling adventure!